THE PURPOSE OF MONTESSORI EDUCATION

Dr. Montessori believed that no human being can be educated by another person. He/she must do it himself or it will never be done. Dr. Montessori felt that the goal of early childhood education should not be to fill the child with facts from a pre-selected course of studies, but rather to cultivate his own natural desire to learn. In the Montessori classroom, this objective is approached in two ways. The first is allowing each child to experience the excitement of learning by their own choice rather than by being forced. The second is by helping them to perfect all their natural tools for learning, so that his/her ability will be at a maximum in future learning situations.

“Whoever touches the life of the child touches the most sensitive point of a whole, which has roots in the most distant past and climbs toward the infinite future.” -Dr. Maria Montessori

WHO WAS MARIA MONTESSORI? 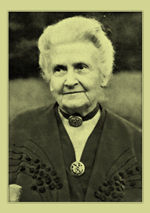 Maria Montessori was born in Chiaraville, Italy, on August 31, 1870. She graduated from medical school in 1896 and went on to become one of the first female physicians in Italy. On January 6th, 1907, Maria Montessori founded the first Casa Dei Bambini, or “Children’s House,” and began developing the Montessori method of education. The Montessori method is based on Maria Montessori’s scientific observations of children at Casa Dei Bambini. Specially designed materials and furniture were created to aid the child in her or her natural discovery of the world around them. Maria Montessori believed that children teach themselves through tireless manipulation of materials and absorb information constantly. This motivated her lifelong pursuit of educational reform, teaching, and educator training. She was dedicated to the self-creating process of the child.